More Children Under 8 are Spending Time Looking at Screens

Almost every major human achievement that is discussed in today’s society has something to do with technology and computers.  The iPad, iPhone, Xbox, Wii, and countless other pieces of technology are in the hands of adults and children.  A common thread between all these innovative pieces is the fact that they have a screen that harnesses the attention of any individual using such products.  Children, especially, have become the new generation of young people who are surrounded by TVs, video game systems, computers, and portable tablets.  However, though this exposure to technology at an early age has certain benefits, the drawbacks are even more important to understand.

For years, the American Academy of Pediatrics has recommended that children spend less time in front of screens; recent studies show that more eight year olds are exposed to screens than ever before.  Further studies for younger children show that kids under the age of two watch over two hours of television every day.  This goes against the Academy’s suggestions that children under two not be exposed to any screens at all at such a young age.  The reasoning behind this recommendation revolves around the fact that quality time between parents and young kids is impeded when a TV is on.  Parents tend to be distracted when a program is being watched, and toddlers generally do not play with the same enthusiasm if a TV is blaring somewhere in their vicinity.  Even programs that are meant for younger audiences are unhealthy for children at such a young age.  It is a proven fact that kids learn more from face-to-face interaction, and lead healthier lifestyles, develop stronger vocabularies, and suffer less from speech impediments.

Numerous other reports state that children who spend too much time watching television, playing video games or other screen related activities are likely to suffer from a list of issues.  A few concerns include irregular sleeping patterns, difficulty in school, less time spent outdoors, and behavior problems.  However, another major issue that has come up is the fact that the scope of screens has changed.  Tablet computers, like the iPad, have become quite popular with higher income families because parents can download interactive apps for their young children.  These apps, both educational and game-like, are not always available to lower income families who most likely only have televisions in their homes.  Though the Academy of Pediatrics has said time and time again that screens are unhealthy for young children, parents are eschewing this information due to the fact that phone and tablet apps are both interactive and child friendly.  More often than not, children are learning something from these apps that they are not getting from TV, and parents think they are helping their kids by not letting them sit in front of televisions all day long.

However, studies are showing that specialists and researchers are unsure where the iPad and other tablet computers fit into the screen time health issues. A myriad of 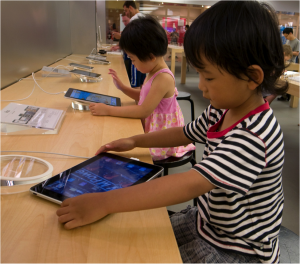 specialists are unsure how the iPad affects young children because not enough research has been done on such a new piece of technology.  Furthermore, iPads and other tablets have a whole range of apps made just for young children.  There are apps for handwriting, hand-eye coordination, practicing vocabulary, and any other skill under the sun.  In fact, there are hundreds of lists posted online that rank which apps are best for children within a certain age group.  A lot of them are rather interesting, and look like they promote creativity and valuable skills for children to learn.  Regardless of how much TV and videogames children watch and play, there is something to be said about the innovative nature of tablet computers, and how they have managed to change the way children think and learn.