Two years ago, I was backpacking though Asia, I found myself in Seoul, South Korea visiting friends and watching the World Cup finale. Against direct orders from my parents, I decided to take a tour up to the Demilitarized Zone (DMZ) along the North Korean border. Having known a substantial bit of history about the peninsula and the tensions plaguing current political intercourse, I was anxious to look over the wall into what I believed to be an alien nation.

Looking back, what startled me most was the discourse in which the South Koreans framed their political situation with the North. While maintaining factually correct stories, the exaggerations they would place on some events gave me a moment to pause. While I know that the North Koreans are not blameless in bad-mouthing and pointing fingers either, the psychologies surrounding the ideas towards one another were steadfast and predetermined.

I was reminded of these memories when I read a September article in Foreign Affairs Magazine proposing yet another opinion towards negotiations with North Korea in the wake of recent aid. In August of this year, the North was hit by heavy flooding, which brought the nation one step closer to an already disastrous situation. The US sent emergency assistance of over one million dollars mostly in the form of plastic sheeting and tents, shying away from food assistance. Author Leon V. Sigal argues that the US must capitalize on recent strides and exploit their energy needs to bring them back to the bargaining table.

What are America’s two options? Ignore North Korea and stop all of the aid we currently send them? Both the World Food Program and the Food and Agriculture Association have presented findings that there will be a severe risk of starvation if US 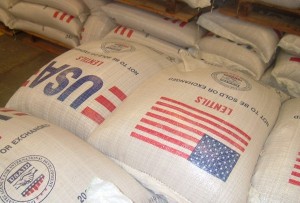 does not extend humanitarian assistance. Already the US government is under harsh criticism for not offering to give even more. America’s other option is to continue with discussions, and allow Pyongyang to continue playing games with multi-party talks, and dangle the threat of nuclear power over the world’s head. This awkward balancing act becomes further complicated with the lobbying from both South Korea and China in trying to influence favorable US actions. We are caught in “damned if you do, damned if you don’t” type of position, where any decisions will draw international criticisms.

While the situation of the Koreas is unique, the difficulty in dealing with dictatorial regimes reliant upon aid is unfortunately not a single occurrence.  Countries such as Zimbabwe and Libya have had long relations with America, and much to our chagrin, our bankrolls. We have watched as these dictators do little to help their citizens, and often do the minimum necessary to keep the foreign donors coming with funds. After all, why should they have to look out for their own citizens when other countries can do the hard work for them? Kim Jung Il is similarly situated, where he can offer policy concessions to the highest bidders while conveniently pocket the funds for personal use. The ultimate fear is that this foreign input will be channeled towards nuclear development, offering Pyongyang extensive international leverage.

Where half-truths and rumors are coming from both the North and the South, it must be difficult for Washington to come to a consensus as to what is the best stance to take with regard to the peninsula. The necessary first steps are to assess and find the exact outcomes they wish to reach with every policy. If the US wishes to simply offer flood relief to be sure that it does not get rerouted, then I believe they achieved that. If the US wishes to bring North Korea back to the negotiating tables, then we must decide how hard to push them in renouncing their nuclear program or instead perhaps look at the long term benefits of leniency. I am sure that there are discussions happening behind the scenes were sensitivity levels can be assessed, but it appears that when there is little international focus on the Koreas there is no rush to address the situation publicly in Washington. However, this continued balancing act with North Korea will be a thorn in the side of developed nations until the world finally understands how to comprehensively disarm, rebuild, and “save” the nation.