A Stock Exchange Without Stocks

In rural areas of Kenya, the overwhelming majority of families live without electricity. More than one third of the population depends on kerosene-powered lamps, which are not only bad for the environment, but they also negatively affect Kenyans in other ways. Toxic fumes, for example, are emitted from the burning lamps and can cause severe health problems, such as respiratory illness, cancer, and eye problems. In fact, according to the United Nations Environmental Program (UNEP), smoke-related illnesses resulting from cooking and lighting fuel smoke cause more women in rural Kenya to die than both malaria and tuberculosis. Kerosene-powered lamps put children who use them to complete homework and other tasks at risk for health problems. The lamps are also an enormous safety risk, as they can easily be knocked over and start a fire. Additionally, kerosene costs the average Kenyan family about $100 per year, which is a huge financial burden on families – especially considering that approximately half of the population living in rural Kenya lives on less than $1 per day.

Fortunately, there is a more environmentally friendly, healthy, and  affordable lighting option for rural Kenyans: solar powered-lamps. Rather than being powered by kerosene, these lamps are powered by a solar panel that charges a lithium battery. 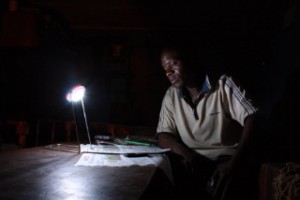 When compared with kerosene-powered lanterns, each solar-powered lamp saves more than 50 liters of kerosene and reduces carbon dioxide emissions by about 135 kilograms. Simply put: these lamps are a far more sustainable lighting option for rural Kenyans than what they depend on currently. They can make a huge impact on rural Kenyan’s health, finances, productivity, and overall quality of life.

Though initially expensive – at about $25 per lamp – solar-powered lamps will save Kenyan families approximately $140 in lighting costs over the course of three years because they won’t have to buy kerosene. However, not many families have an extra $25 lying around to purchase a lamp – and many homes may need more than one. Luckily, there have been several organizations that have helped rural Kenyans replace their harmful kerosene-powered lamps with solar-powered ones. Renewable Energy Ventures, for example, has launched Solanterns, which is an initiative to replace one million kerosene lanterns with solar-powered lamps. With the help of USAID, the initiative has thus far equipped over 1,500 households with the more sustainable and less dangerous solar-powered lamps, and has consequently changed many Kenyans lives for the better. More than half of children living in homes with solar-powered lamps are reportedly now able to study for an additional two hours per night, which obviously enables them to do better in school and get a better education. Additionally, fruit and vegetable stands can remain open at night because the solar-powered lamps do not emit fumes that cause produce to rot. This can cause even greater financial benefits to Kenyan families.

Click here to find out what you can do to get involved and help Solanterns continue to change lives in Kenya.