Growing up, many of you have probably watched Star Trek. Exploration of space was an exciting prospect indeed. What fascinated me though, while watching, was the huge abundance of resources available, such as basic raw materials, energy, even food and water. I remember thinking that if this was actually possible it would solve all of Earth’s problems. Poverty, famine and climate destruction would be a thing of the past.

But is it just science fiction? 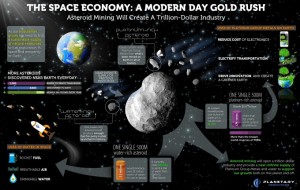 Years ago I would have said “Yes!” Today I believe that Space Mining is a scientific fact. “It’s one small step for man, one giant leap for mankind” as said by Neil Armstrong. It has been over 50 years now since his words, came crackling from the moon. Major strides, around the subject of Space, have since been taken.

Space mining is real. There are currently two companies gearing up to start with that very endeavor,  a company named Deep Space Industries, and another named Planetary Resources. Both have drawn up accelerated plans to prospect asteroids, and other near Earth objects, with the view of mining in the future. I say accelerated because these companies plan to have their probing done by 2015, and plan to begin mining as early as 2023. This has been further accelerated by NASA and President Obama, who have created a change of focus from the Moon, to near Earth objects, particularly for mining purposes.

These companies are searching primarily for metals. However, water and hydrogen are also a high priority, as these could be used to produce rocket fuel in Space itself, which would further aid exploration activities. A plan currently exists to build a Space fueling station, for that very purpose.

Why Space, what if there nothing to be found? 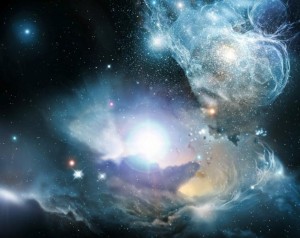 It is proven that there are a vast number of objects to be found. There are over 9000 asteroid’s viably close to the Earth. The largest body of water has also been found in Space, it has a volume that is 140 trillion times more, than our own oceans. Those numbers are simply astronomical, pardon the pun. Just last month, the asteroid 1012_DA14 measuring a mere 150feet (45m) zoomed passed Earth. It, however, had $65 billion worth of water and $130 billion worth of metals within it. Imagine what the numbers would be for, even a slightly, larger asteroid.

How can this solve our problems, here on Earth?

This for me is the most exciting part, if all these resources are brought to Earth, an unlimited supply would be created. Think back to those stories, told by your parent and grandparents. The ones about how much milk used to cost, or how much they forked out for their cars. Those prices were laughably low. If resources could possibly be brought in from Space, it would bring an end to inflation all together. All that we will be paying for is the means of production. This could eliminate poverty worldwide, as there will be an abundance of water for growing food, and an abundance of metals and other materials for housing. Furthermore, mining on earth would become obsolete, freeing up valuable land, for farming and habitation. This is very possible because of one simple law, the law of supply and demand. A huge supply of a resource, coupled to an equally huge demand, means the price of those resources will drop significantly.

What are costs and legal implications?

Yes, the fact is that the initial costs are high. However like any new means of production, the initial costs will be recovered relatively quickly. Most of the costs will be negated, for the mined resources will also be used in the process of mining itself, for example, powering the Space vehicles and machinery with water and hydrogen from asteroids. The lack of atmosphere in Space also ensures an almost unlimited workable life for machinery and tools. These technologies have already been built and tested, and they stand at the ready. 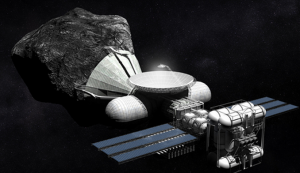 On the subject of Laws, new Laws will, eventually, be needed according to Professor Frans Van Der Dunk. However he believes that, the 1967 Exploration of Space treaty Sec 2 which states: No claims of sovereignty can be made by any Country in Space,  will suffice and ensure no legal issues, from the process of mining, and from the process of bringing resources to Earth.

What about deep sea mining, as an alternative?

The main issue with deep sea mining lays in the fact that, the ocean’s resources are completely unknown and undetectable. Resources available from Asteroids and other near Earth objects are presently detectable, measurable and fully known.

Earth is going into a crisis from drastic climate changes. Drastic problems call for drastic solutions. If those solutions lay in Space, then I, resoundingly, say “Go for it!” Considering Mankind’s survival is at stake, I’m sure you would say the same.