If you read my last post, “Leading in Health Care Innovation, Lagging in Health,” you may have noticed I mentioned obesity as one of the health problems affecting our country. But let me explain to you how big of a problem it actually is, not just in the U.S. about around the world. As it turns out, obesity is a bigger problem than hunger, according to Global Burden of Disease report. Nearly 1.5 billion adults in the world are overweight, and half a billion more are obese. With the increase in obesity comes an increase in the non communicable diseases (NCDs) 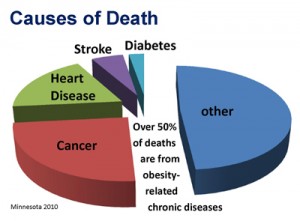 associated with it. For example, diabetes and heart disease. Obesity is slowly becoming the leading cause of disabilities around the world. And, with the exception of Sub-Saharan Africa, all other countries seem to be facing alarming rates of obesity. In fact, it has increased by 82% globally in the past decade.

Many attribute this problem to the “western lifestyle” that has been increasingly adopted. The culture I alluded to in my previous post has been spreading globally and the impacts are the same. With the supply of unhealthy food becoming increasingly processed, available, affordable and highly promoted, the detrimental effects continue to rise. My intentions are not to criticize or condemn westerners and their values. I completely acknowledge and respect the large strides we have taken in the healthcare field. Western health research and innovation has succeeded in extending the average life of our population. I’m just trying to point out that while you’ll find the deaths by heart disease and stroke has decreased over the years, you’ll also find that the number of people diagnosed with these diseases has increased.

Therefore, I once again suggest a necessary shift in focus. Instead of investing in treating non communicable diseases, we should be investing in preventing them. This will not only help our world in respects of health, but it will prove to be economically beneficial, as well. If this current trend continues, the cases of obesity will increase drastically and, according to a 2011 report, NCDs will cost $30 trillion over the next 20 years. Steven Gortmaker of the Harvard School of Public Health says, “Governments need to lead obesity prevention. We’ve let the markets do its work and it’s worked well to produce obesity.”  I think he’s right. Without a more active effort and policy rectification our world will not be able to effectively combat this epidemic. There may be a few individuals who will 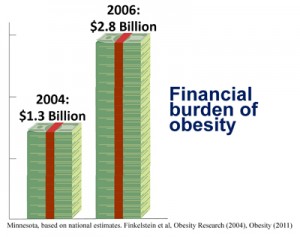 take it upon themselves to live healthy and make good choices, but with the constant influx of unhealthy options available to the public, individual will may not be enough to successfully fix this problem. There are a few ways the governments can go about taking action:

If governments were to implement these strategies, our world is sure to see a decline in obesity rates. A good example of this can be seen in the decline of smoking in the U.S. Tobacco taxes were fundamentally important in changing the consumption of tobacco. If we were to apply this same theory to the junk food industry we may see similar results.

For some reason it seems people are more willing to spend money on treatments and surgeries, than to deal with the underlying cause that could prevent these costs in the first place. That said, I think policymakers need to pay more attention to the numbers and take more initiative in creating preventative programs and policies.