According to a National Academy of Sciences report , American is unhealthier than 16 other developed countries. Americans are more likely to die young from obesity and heart disease, and even more likely to be murdered or die in a car accident. America scored the worst in nine areas: infant mortality; injury and homicide rates; teen pregnancy and sexually transmitted diseases; AIDS; drug abuse; obesity and diabetes; heart disease and lung 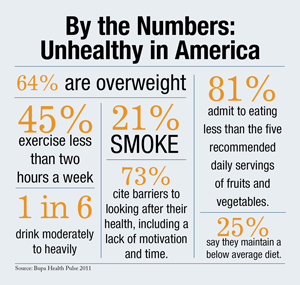 disease; and disabilities. Furthermore, the 2011 National Research Council found the life expectancy in the U.S. was increasing at a slower rate than in other high-income democracies. It’s easy to blame our health care system as many commonly do. Because we do not provide universal coverage, low-income and less educated families often receive poorer care. With limited public health care and primary care resources, as well as a large uninsured population, Americans are more likely to find care inaccessible or unaffordable, thus resulting in the poor health of our nation. That said, one would think the solution to this would to be to invest more money into health care so more people can receive the benefits, right? But did you know that America is already spending the most money on healthcare? Yes, about $8000 a year per person, in fact. That is more than twice what countries such as Britain, France and Sweden spend who have universal healthcare, and yet we don’t live longer and have poorer health.  And as mentioned in my blog title, the U.S. does lead the world in health care innovations.

You see, the problem, however, is not that the United States is losing in this competition, but that people are suffering and dying from illnesses and injuries at rates that are unnecessary and avoidable. There must be some fundamental reason for this issue. While limited access to health care may be what is prohibiting some people from treating their conditions, there must be something that is causing these conditions in the first place. Maybe it is time to take a look at ourselves and search for a deeper problem.

Have you ever thought that the problem lies in the culture of America?

There is likely no one reason that accounts for the various health problems that affect Americans, but rather a 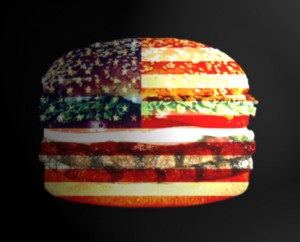 combination of different factors. For example, the country’s reliance on cars that keep us living sedentary lives, or the love of fast food and the tendency to avoid exercise. Americans also tend to over-work which causes stress that can lead to weight gain, substance abuse or criminal behavior. These are just a few of the possible causes of poor health in our nation. But these factors once again can be seen to stem from a larger issue: our culture. Our country prides itself on being a free and individualistic society. The culture in American highly values personal autonomy and generally wants to limit the control of the government and other entities on our personal lives. However, this culture and attitude may be what is working against our ability to achieve optimal health. And, though we may know what is good for us, we may not always act on it. I mean, most of us know that we should exercise 3-4 times a week, but how many of us actually do it? How many of you conveniently forget to wear your seatbelt when sitting in the back seat?

So here is an idea: let’s focus a little less on health care and a little more on health. If we want to improve our health, whether it be as an individual or as a nation, we have to take some necessary steps. Take a look at your lifestyle. Are you making healthy choices? I know we all lead different lives and have busy schedules, but take the time to eat healthier and exercise a few times a week. I promise it will help in the long run. We need to reverse the trend: let’s use our freedom and autonomy to live better, healthier lives.