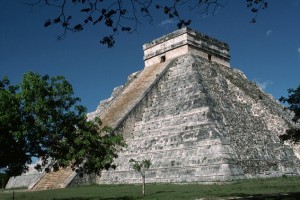 October 1981, Chichén Itzá, Mexico — The Pyramid of Kukulkan at Chichén Itzá, constructed circa 1050 was built during the late Mayan period, when Toltecs from Tula became politically powerful. The pyramid was used as a calendar: four stairways, each with 91 steps and a platform at the top, making a total of 365, equivalent to the number of days in a calendar year. — Image by © Charles & Josette Lenars/CORBIS