The media has self proclaimed these London Games to be the “Games of the Girls”. For the first time in Olympic history, all 204 countries were represented by both male and female athletes. With the addition of boxing, women were finally able to compete in all Olympic events. In the United States, in particular, female athletes won 58 medals, including 29 gold medals, which means that if they were their own country, they alone would be third in the gold medal count. Team sports in particular were the name of the game for the United States – which won gold in women’s basketball, soccer, water polo, and numerous relays of both track and swimming. 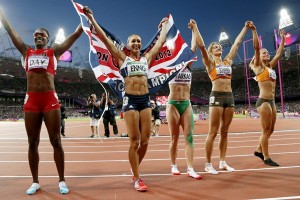 It is true – women ruled these Games. They dominated the last two weeks. However, what else dominated these Games? Negative publicity for many of these women. There were numerous news reports worldwide, which questioned the weight and fitness of many of these athletes. A public mockery was made about the physical appearance of certain other athletes, who didn’t “fit the mold”. Unfortunately for these women, a little success landed them with a lot of criticism. Here are some of the less-than-uplifting storylines from these “Games of the Girls”.

Why do we, both men and women alike, feel that we have the right to tear down our fellow female athletes? Why are we the ones to decide if they’re not pretty enough, small enough, or skinny enough? We can’t continue to celebrate their accomplishments one moment, and then insult their appearance the next. The media has a responsibility to end this vicious cycle, and actually start focusing on how a female athlete does rather than how a female athlete looks. And if media outlets aren’t held accountable, then it is our job to counter this irresponsibility by writing letters to the editor, making comments online, or starting a twitter handle like #layoffleisel in the case of Leisel Jones. I’m all for it being the “Game of the Girls”. However, my hope is that we leave that nickname for a time when all female athletes have the freedom to compete, no matter how they just might look in that bathing suit.