Last year a province in China called Guangdong made headlines as the residents rioted over a land dispute with the local officials in December 2011. The village residents of Wukan were upset that local officials were taking their farmlands and selling them to large companies for profit. The month long protests led to the corrupt officials removed from office, and concessions being made to return the contested land back to the village.

This province is located just north of Hong Kong in the south of China. Run by Guangdong Party Secretary Wang Yang, this region could potentially alter the future for Communism in China. Being touted as one of the most progressive leaders in the country, Mr. Wang decided not to engage in the typical protest crackdown routine that China takes. Instead, in his region he employed mediators to help resolve the problem and then offered to let the village organize their own local government. This means an election will be held. Through a tightly controlled and monitored process, village leaders have been chosen to work out a process of how this election can be undertaken and implemented.

Choosing one of the protest’s leaders Lin Zuluan, the Communist party has allowed him to conduct the first round of elections held last Wednesday in an elementary 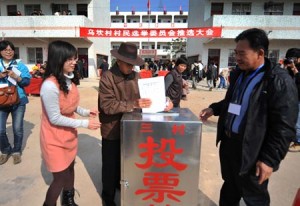 While many eyes will be watching the proceedings and outcomes of this election, Mr. Wang has the most at stake.

Where Mr Wang sees the election as a solution to China’s problem of mass rural protests, other more conservative leaders believe Wukan is the first stop on a perilous political journey.

Regardless, this is a big step in Chinese politics. While it will not have immediate repercussions throughout China, it stands to show a progressive shift in politics taking place. While it would be reckless to predict that this is the way of the future for the quazi-Communist regime, it is a notable (but small) change of outlook. In allowing the villagers some autonomy in choosing their local level leader, this shows an experiment in self-rule for the country. Perhaps this will become a template for the country as more uprisings begin making the connection between the injustices many villagers face and the lack of democracy in the country.

Calling these uprisings “rice-roots movements”, many other villages are being inspired by Wukan as well as the recently held elections in Taiwan. The Chinese seem to be ready and eager for the opportunity to practice this democratic process. While it is true that however the elections in Wukan turn out it will not necessarily diffuse to the rest of China any time fast. But we will for sure see a few benefits come from it. To be certain, when the farmer’s land rights are more secure, all China will inevitably be better off.

If these elections turn out successful, perhaps we will begin to see this right demanded 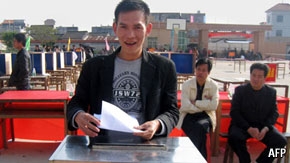 elsewhere. After all, China has a long track record of experimenting in small steps with economic and political reform. While some have been more successful and influential in the government, we will see if this election turns out to be one of the same stories. If so, perhaps this lifetime will see a dramatically altered course in Chinese politics.

–Katherine Peterson is a Program and Research Intern with the SISGI Group focused on theories of development, globalization, and political ramifications of development work. Follow her on Twitter @ktp907