Recently I read an article that told the story of a former child soldier who fought in the civil war in Burundi.  The story recounted his tale and brushed on his use of narcotics as a means to escape his memories of the war.  As I read this I could not help thinking; this man has no support, no psychologists and no training for anything other than guerrilla war.  This man’s only option is to abuse illegal drugs and pray he never has to kill again.  This man has no hope for a future.

We hear a lot in the news about child soldiers but I personally never hear much about their rehabilitation.  It is certainly important to end the practice but even if there were no more child soldiers when I wake up tomorrow the problem will not have been solved.  Thousands of men and women living in the world today carry the memories 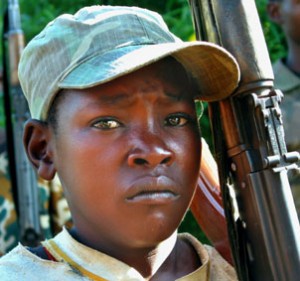 of war seen through the eyes of a child.  These men and women are left adrift.  We say we hope that no more children have their lives ruined by this, but when will we start treating those who have already lived it?

There are some organizations that are trying to address this issue but they are not doing enough.  One organization provides free computer access to online training guides.  It is a good organization, but what about those who can’t read?  Even if there are videos in the language they speak online how can these young adults find them?  Not to mention the fact that even if they are trained and become productive and appreciated members of their societies they still must live with those terrible memories.  They still must look in the mirror and see a killer.  The only way a person can get through that kind of self-guilt is to justify it, and the best way to justify it is to say that it was right.  To say they did what they had to.  And while this is probably true it opens the door to more justification, such as when the next war starts and they have to do what they have to do again.

This is why it is vital to get these people help.  It is not just a humanitarian issue; it is a global security issue.  By leaving these people, who literally grew up in war, out there on their own with no help and no hope we invite violence upon ourselves.  If these people become warlords themselves, and those of us in the developed world did nothing to help them when they needed it, I think the blood will be on our hands.  As long as we allow our apathy to enable violence are we not as guilty?  Are we guiltier?

I do not mean to sound sanctimonious.  I have been as guilty of apathy as anyone.  But now is the time to end this.  Now is the time to start fixing the problem and stop fixing the blame.  We can prosecute the monsters who are guilty of this to the tune of millions of dollars in legal fees or we can try to educate and rehabilitate those who would become those monsters.  If we keep cutting these weeds at the stem

they will keep growing back.  We need to tear up the roots.

If you would like to take action contact groups like UNICEF, Child Soldiers International, and Amnesty International and ask what they are doing to rehabilitate these young adults.  These are good organizations that do very good work and we should all respect them, but it is not disrespectful to ask that they look more into this.  I’m sure they would do whatever they could if they had enough money so donating will also help.  You could also donate to the aforementioned charity organization U-Touch which is already doing a lot of good to end this problem.