The Hardanis family, made up of Mohammad, his wife and two young girls were among the approximately 250 people on board a people-smuggling boat headed to Australia. The vessel carrying the migrants sank during the journey. Only 47 people survived.  One of his daughters was rescued by a fishing boat that was in close proximity.  Mohammad, a welder from Iran, survived but his other daughter and wife did not.

Migrants from Guatemala and Honduras cross through treacherous and deadly terrain in Mexico on their way to the United States. Men and women from various African nations try to navigate from the border of North African states through the Mediterranean Sea to the closest ports to start a new life in Europe.  Many reach their destination where they will find a wide range of different attitudes towards them and varying degrees of opportunities to make it.

Others will not survive the journey. The Hardanis story is not unique. People searching for a new life abroad, due to a wide number of reasons, meet an unfortunate fate. Overcrowding, poorly built vessels and unpredictable 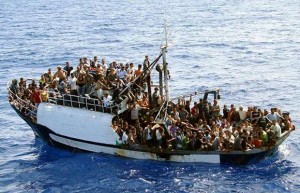 weather conditions commonly prevent them from reaching their destination.

What makes these scenarios staggering is the sheer numbers. The majority of 2011 arrivals in Europe by sea landed in Italy 56,000; of those 28,000 were Tunisians. Neighboring Malta received 1,574 while 1,030 arrived in Greece.  Most were migrants, not asylum seekers. The actual journey took place on dilapidated vessels with refugee and migrants passengers often forced into having to skipper the boats themselves. Many reported that fellow passengers beat and tortured them. They also report that more than 1,500 African migrants died while attempting to cross that year.

Spain reported that 340 migrants reached the Canary Islands by sea in 2011. The Guardia Civil, Spanish authorities, reported that 29 migrants are known to have drowned in 2011, but some NGOs in the field report that the numbers of deaths are greater.

So whose responsibility is it to provide protections? What is the government’s role? The country of origin or destination?

A case study we could examine is that of recently arrived Cubans in the United States. During the Clinton administration both governments reached an agreement that the United States would stop admitting people found at sea. This legislation commonly known as the “wet foot, dry foot” policy, states that a Cuban found on the waters between the two nations (wet feet) would be sent home or to a third country. One who makes it to the U.S shore (dry feet) gets a chance to remain in the United States. In 2011, U.S. Coast Guard interdictions at sea were 1,000, while landings on U.S. shores were almost 700.

Since the mid-1990s immigration patterns have changed. Many Cuban immigrants are now crossing through the Texas-Mexico border; this is now known as the “dusty foot” phenomenon.  Last year, the number of people processed at the border was approximately 6,000.

In order to address this issue we need to look at the main three different views on the subject. One believes that we should change our immigration policies to allow for the safe resettlement of this population. But will this provide for the resources necessary to not only rescue these groups, but also provide them protection and assistance to take care of their short-term and long term needs? Does it discriminate against populations who are working through legal channels to arrive in the United States?

A second perspective is that we should address the root causes of migrants at sea as many search for new opportunities because of poverty, political instability and persecution back home. Addressing those might stop some of the migration issues and the unfortunate deaths. A third possibility is to not admit anyone who does not come through legal means and invest in that money in border protection. What do you think?

All three perspectives offer different options with varying outcomes. The only thing that one can not deny is that there is a rising number of people trying by every means to make it to the United States. The cost for some is with their lives and these situations are unfortunately and probably preventable.