It’s the New Year, and we all know what that means; making resolutions we have no intention of fulfilling.  We set our goal; maybe it’s even the same one from last year.  The first day goes by and we think about it, consider it, and plan on how we’ll start on it tomorrow.  Tomorrow comes, and the next day and the next day.  Before we know it we still haven’t finished War and Peace, or had eight glasses of water in a day, or lost those last five pounds.  These things are okay.  They are not life threatening, and they might legitimately be accomplished when you make them your resolution next year.  When it comes to climate change, world leaders are treating the issue like it’s their New Year’s Resolution; something they’ll figure out or get started on at some other time.  Since the beginning of climate change talks, world leaders have procrastinated on truly committing to enforceable, achievable targets, and we’re running out of time.

Let’s start at the beginning.  In 1992 in Rio de Janeiro, countries from around the world met at an “Earth Summit” and produced the United Nations Framework Convention on Climate Change (UNFCCC), an international, non-legally binding treaty.  The signatories of this treaty recognized that the current amount of environment degradation would inevitably lead to rising temperatures and the disruption of ecosystems, the change of weather patterns, and countless other life threatening issues.  The treaty itself contained no legally binding agreements, no country-specific emissions targets, and no enforcement mechanisms, thus leading to the start of a worldwide procrastination scheme.

Finally realizing two years later the error of their ways, the UNFCCC reconvened to adopt the first binding, and “enforceable” agreement to address climate change, the Kyoto Protocol.  Currently 191 countries have signed the Protocol, committing 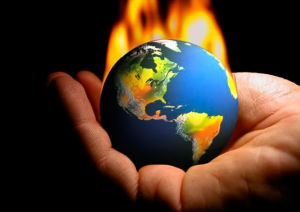 themselves to the guidelines outlined.  Among these countries, 37 industrialized countries (Annex 1), agreed to target their greenhouse gas emissions (GHGs).  During the negotiations the parties were able to reach a consensus to lower GHGs emissions by a collective average of 5.2% (based on 1990 average emissions) from 2008-2012.  The Kyoto Protocol was signed in 1997, meaning although countries were “bound” to this agreement, in reality they parted ways and gave themselves a ten-year summer vacation before their homework began.

Some smart decisions were made at the Conference of the Parties in Japan.  First a realistic goal was set.  To ensure countries had tools to reach this goal, several “flexible mechanisms” allow countries to collaborate and work together to meet their common goal.  For example, the Kyoto Protocol permits emissions trading, that allows countries to increase their emissions by swapping with another country (obviously in exchange for some other benefit).  Also, the clean development mechanism allows developed countries to invest in clean technology in cheaper, or developing countries; however, this rule is not strongly enforced as emissions reduction projects are being fraudulently accredited.  Thirdly, joint implementation strategy offers credit for swapping high emissions technology for low emissions technology.  This circumstance usually takes place in more developed countries.  Although Kyoto has some strong strategies for emissions reduction, it has no enforcement mechanism.  If a country fails to reach its emissions targets by the end of the first commitment period, that nation will need to make up the difference plus 30% in the second commitment period, once again pushing off the problem to the next generation of policy makers.

Following Kyoto, multiple rounds of climate change talks have been held to deal with the lingering issues.  By researching the results documented on the official UNFCCC website we can see a pattern develop.  Looking at Bali in 2007, we observe the goal of this conference was to create a “new, comprehensive process to enable the full, effective and sustained implementation of the Convention through long-term cooperative action, now, up to and beyond 2012”.  The agreement at this round of talks was that they would agree to a plan of implementation at the COP 15 in Copenhagen.

In Copenhagen, the talks were aimed at limiting greenhouse gas emissions so as not to raise the average global temperature more that 2 degrees Celsius above pre-industrial levels; the result of this discussion was that “no agreement on how to do this in practical terms” was reached, and options and decisions “needed to be made later on in the negotiations.”

At COP 16 in Cancun, progress seemed possible.  Developing countries were asked to propose mitigation strategies, and developed countries created a fund to assist in implementation of these strategies; however, with the ever present battle surrounding common but differentiated responsibilities, developed countries, namely the U.S., are unwilling to contribute funds when BASIC countries (Brazil, South Africa, India and China) emit massive amounts of greenhouse gases and are gaining an economic advantage.  Mitigation strategies could not be implemented until future funds were provided.

Finally in COP 17 in Durban, South Africa, possibly the most elusive agreement was reached yet: a new universal, legally binding climate change agreement would be adopted “as soon as possible”.

Unfortunately, the Earth isn’t as big of a procrastinator as the people that live on it and take advantage of it.  With the ozone depleting at its own rapid rate, can we really afford to make decisions “as soon as possible”?  It’s time the U.S. becomes the world leader it claims to be and begins to take a real and aggressive stance on climate change.  World leaders need to not allow their politics and personalities interfere with the very survival of our planet.  The time for next year’s resolution is over, now is the time to make real, impactful changes to our environmental policy.