In my post last week about Busan, I laid out what goals I wished to see accomplished at the Fourth High-Level Forum on Aid Effectiveness. I stated earlier that I would like to see emerging economies start to play a greater role in international aid. Also I wish to see a greater recognition of the need for increased transparency in development funding. Looking back, were these goals reached? How much was actually accomplished in Busan?

While I recognize my previous article may have been a bit pessimistic about the outcomes from the Forum, I am relieved to report that both of these issues were addressed.

First, China and India were persuaded to sign the final resolution from the Forum, stating that they will offer to work with the international arena in increasing their 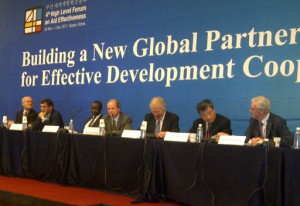 contributions towards foreign aid. This is important because it marks a beginning of a new stage of how aid is received and possibly allocated. In part this is recognition that these countries have something to offer in the quest towards development, seeing as they continue to deal with similar internal problems. While this seems like it was a win all around, inevitably politics came into play in making this deal finalized.  The document ultimately states that these signatory countries are held to a lower standard, and are included on a voluntary basis. This caveat has upset many other nations in that voluntary means unlikely adherence to the declaration. After all, even past full commitments to declarations within the field of aid have not been met by most powerful countries. This leaves little hope that voluntary action will also be upheld.

The commitment to transparency is an important aspect of foreign aid as well. This document states that the recipients of foreign aid will be responsible for monitoring results and transparency. However, what this actually means is also left vague. The new Global Partnership established will now have 6 months to flesh out exactly what they intend with such words. On their sight, Oxfam stated “One billion poor people are waiting for more than words — they want measurable action.” They too have high stakes in seeing this declaration come to action.

In my opinion, one of the actual and immediate successes to have come from Busan is the growing conversation surrounding south-south lending and three-way learning. South-south lending is essentially just as it sounds. It is when developing and emerging markets offer aid to either one another or surrounding countries, without the facilitation of the developed nations and international aid programs. This is important because in the past, these relations have helped to foster economic and political alliances, directly helping emerging economies. I think it was important on behalf of the OECD countries (the typical 34 market economies involved in foreign aid) to recognize the impact these relations are having globally, and to help foster these commitments.

Similar to this, three-way learning is a different approach to solving global problems. This coincides with South-South lending in that it looks to a bigger variety of countries in answers for solving development problems. One might think that this is obvious, but it has been a sad reality that the practice of turning to consultants and academic “experts” before looking to others with real experience is still maintained. The underlying message is that these “experts” are typically western educated, and continue to address such issues through that lens. Three-way learning brings more potential solution to the forefront, opening the possibility for a more global learning to begin.

Many will liken this Forum that took place in Busan to a tiger that has no teeth. The resolutions and plan of action reached did not necessarily provide a clear direction for the future. However, judging from past experiences, what more did the international community hope to gain? Instead, I opt to look towards what issues were brought up that previously were considered unnecessary. The recognition that developing countries have experience to bring to the table is noteworthy. Additionally, showing emerging markets that with more global power comes a greater responsibility is an important stance to recognize. Therefore, I say we give Busan one more year before we truly judge it’s successes. After all, that is when the real changes will either begin to emerge, or we will see continued avoidance from donor countries towards foreign aid. Lets hope that in one year, the critics of today are proven wrong.