The precarious economical situation, combined with outside influences like the Arab Spring, has caused a unique demonstration to rise in the United States.  Occupy Wall Street, a leaderless movement that consists of people from all backgrounds, has been an ongoing series of demonstrations and rallies since September 17th.  According to the resistance’s website, they are the 99% of individuals who are fed up with the greed and 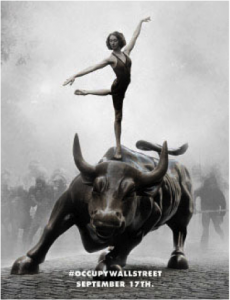 corruption of the wealthy 1% of the nation.  Specifically, the resistance focuses on corporate greed and corruption as well as social inequality.  In order to bring attention to these issues, Occupy Wall Street uses Facebook, twitter, tumblr, and other social media networks to organize rally events and demonstration times.

Occupy Wall Street started with an anti-consumerist non-profit organization known as Adbusters.  The organization’s website clearly states that the inception of the protest began with the effects of the Arab Spring in Tahrir Square, Egypt.  Slowly, due to the use of various social media networks, the Occupy Wall Street resistance came into being, and quickly attracted the attention of thousands of people, including a plethora of young adults, across the nation.  Though the demonstrations mostly take place in the Financial District of New York City, there have been reported “occupations” in other cities like Boston and Los Angeles.  Though no clear demands have been made, the resistance continues to state that it will not end its demonstrations and rallies unless their demands of social equality and corporate reform are met.

Though Occupy Wall Street calls for people of all ages to join their resistance, the majority of individuals who have participated in the rallies have been young adults.  Many are either in college or recent college graduates who have yet to find a job.  A myriad of young people feel that it is time that they rally against the financial system since their economic and job situation is so dire.  The frustration and anxiety over the job market is not just a mental thing for young people, recent statistics back up their fears.  In 2010, only 55.3% of youth between the ages of 16 to 29 were employed; a major decline since 2000 when 67.3% of youth in this age category were employed.  Furthermore, debts from student loans for recent college grads have surpassed credit card debts for the first time, and slim job opportunities make it difficult to pay off the loans.  Thus, it makes sense to see why so many young people have become involved with the Occupy Wall Street resistance.

Though it is amazing to see so many young people get involved in a demonstration that they are passionate about, it is also difficult to see where the Occupy Wall Street resistance is headed.  The resistance idolizes the Arab Spring, specifically the events at Tahrir Square, because so many young adults took part in changing their political situation.  However, it is important to clearly look at the political atmosphere in Egypt prior to the country’s revolution.  There are a plethora of differences between the United States and Egypt, and though it is awe inspiring to see the youth take part in making a major part of history, it is imperative to see whether or not a sustainable result can come out of the resistance.  Seeing young people peacefully get involved in issues that concern them is an absolutely wonderful thing, but history, politics, and past resistances must be taken into consideration when trying to make changes on such a major scale.  Hopefully Occupy Wall Street will secure some of the demands it desires, perhaps something to do with youth unemployment, but it should not be overly disappointed if not all demands are met. 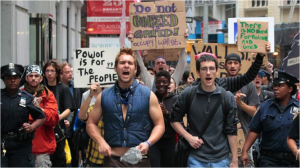 Furthermore, it is equally important to study past youth movements such as peace rallies against the Vietnam War and demonstrations for equal rights.  The end to the war and the right for African Americans to vote, attend integrated schools, and a number of other accomplishments took years of protests and were national concerns.  However, few people know about the Occupy Wall Street resistance, and the movement has not garnered the attention of millions across the country.  Even more pressing is the fact that there have been a great number of anti-corporate movements in American history, but many have been unsuccessful due to the strength of the business industry.  Many times, such movements fall apart when the economy picks up again because impassioned students and workers realize that the job market is once again flourishing.  Thus, Occupy Wall Street is an admirable movement, but those taking part in it must realize that successful results require time, energy, and dedication.