Today, I was forwarded a Youtube clip from a friend only titled “Greenpeace”. While I was expecting a video of protesters waving signs on a dingy boat out in the Aleutian Islands, I instead got a cacophony of foul language and brief clips of international people on telephones.  I had no idea what where it was going until the final scene exclaiming that Greenpeace turned 40 on Thursday Sept 15th , and they are still a force to be reckoned with.

Doing some more background research into the organization, I found a much more inspirational video on their website, where more of their mission is explained.  However, I was still curious about the claim of “40 years of victories”, and the organization’s declaration of such successes.

Claiming to be the first environmental movement, starting in 1971 Greenpeace began it’s focus on stopping the whaling industry, and has since expanded to such causes as 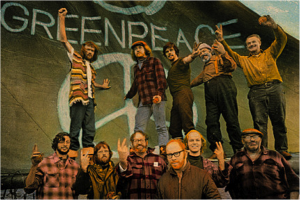 saving the forests, oceans, and reducing nuclear testing. With these damaging practices still in effect today, how is this organization measuring their success? Greenpeace International Executive Director Kumi Naidoo stated, “Greenpeace’s ultimate success will be measured when we are no longer necessary”.

However, this seems a bit unrealistic, especially when the organization is claiming to be bigger than ever, currently operating in over 40 countries and 2.8 million donors worldwide.

While I have no intention to discredit the work that Greenpeace has done, or ignore the movement they have started towards environmental protection; I would like to propose to the organization a different approach for the next 40 years.

I believe that Greenpeace has missed an invaluable opportunity to create a sustainable impact for their movement. In 1971, they began as a renegade group of individuals fighting against the whaling industry, and as their website states, “just like then, our activists are our greatest strength: ordinary people willing to do extraordinary things to protect the environment. Over the years, they have faced jail, physical threats and political persecution”.  While this is admirable both for ensuing an international movement, and not out of character for the protest atmosphere of the 70’s era, I would have hoped that the organization had modernized with the time. Unfortunately, this does not appear to have happened.

This stagnation frustrates me for two reasons. First, it appears that Greenpeace has grown into a sustainable organization as opposed to one with sustainable impacts. A sustainable impact is one measured by its maintenance once the goal has been reached and the organization has diverted its focus elsewhere. However, it appears that today Greenpeace has become a profitable name, and funding has since become the priority of the organization. It also can’t hurt that they have a history of extremely visible demonstration tactics, keeping them in the forefront of the movement. With financing and bottom lines as the emerging focus, a non-profit will often become engrossed the business mentality of fundraising and maintaining it’s status among “competing” organizations. Not that using time and energy is not an integral aspect for maintaining the operations of an NGO, but perhaps this partially leads to the explanation as to why larger “victories” have yet to be seen. Because, as stated above, when successful these activists would be out of a job completely.

My second misgiving towards the organizations is that when dealing with environmental issues, in avoiding the inevitable tragedy of the commons, government involvement and consultation must concurrently be realized when successful environmental campaigns are won.  One such example of this neglect was in creating and enforcing a marine reserve in Cabo Pulmo, Mexico. The story goes that fishing nearly devastated the ecological biodiversity in the oceans surrounding the reef in the area, bringing the fishing industry to an end.  Once the wildlife returned to the surrounding reef, an obvious next source of commercialization for the area was marine tours for visiting tourists. While this environmental preservation is without question impressive, the city of Cabo Pulmo and Greenpeace have created their own next hurdle.  Because of the successes of this project, the Mexican government has approved the building of a 27 thousand room resort, capable of housing 490 yachts; roughly the size of Cancun’s port. This seems to be a perpetual problem for Greenpeace: preserving an area with great success, only to watch others try and capitalize upon it while sending the cycle of preservation into motion again.

Greenpeace appears to miss a critical next step towards sustainability in regards to establishing a base of political collaboration. Without legal precedence, a competing organization will (and has) capitalize upon their competitor’s weakened stance when under fire from Greenpeace, which is common practice in the profit driven sector. Without legal ramifications enforced by the home government, places will continually witness this imminent cycle of devastation and preservation. As of now, it appears that Greenpeace would rather play the pariah and “crusader for justice” than an organization willing to research and enact broad reaching political reform. This must change in order for their victories to have long lasting impacts into the future. Being in the forefront of the environmental movement, Greenpeace can potentially be the most influential political collaborator, educator, and voice for the environment. Without this fundamental change of approach, all the whales and trees that have been saved will mean nothing as soon as the spotlights have been diverted.

Again, without wanting to sound as though I discredit all that Greenpeace has done over the last 40 years, I believe that their biggest and most visible success is that they brought the conversation of environmental conservation to the forefront of minds and media. They have been instrumental in being just vocal enough that at least Americans (not speaking for all, though) feel some guilt in eating whale or wearing baby seal coats regularly. My hope for their organization in the next 40 years is that they maintain this educational stance, and shift away from being a thorn in the side of big-business and big-governments, and instead reach out to become a working partner, and work to enact large scale environmentally responsible growth and expansion.