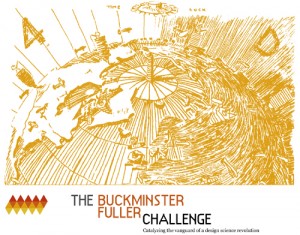 support the development and implementation of a strategy that has significant potential to solve complex problems. The candidates (individual or organizations) have to present their projects to a comittee and engage in a series of panels and discussions. The projects that participate in this challenge must be a priori holistic, integrative, interdisciplinary and innovative. Therefore this challenge attracts bold, visionary, tangible initiatives focused on a well-defined need (poverty, hunger, drought, climate change) of critical importance.

As soon as I read the word “design”, I was instantly attracted to the conference because I believe that a lot of our current problems are a matter of bad design. I am under the impression that smarter design helps us to alleviate various difficulties simultanously, and that making institutional and systemic changes ultimately will bring the best solutions (as seen with the IMF).

For one example of how much design affects our daily problems, lets take green house gas emissions and climate change. We could reduce enormous amounts of green gas in the atmosphere by diminishing the emission from cars, the biggest emitter. How to reduce emissions from cars? The best thing to do is to redesign our urban space. We could get rid of the suburbs and find ways to get the things we really need nearer to us (farms instead of malls for example). The american suburban life inherently requires the use of cars to transport ourselves; it is therefore inevitably designed to emit incredible amounts of carbon dioxide. If we redesign in a smarter way our urban space (and maybe even end the vague dichotomy between urban and rural), we could reduce significantly the emissions without even having to switch to biofuel or biodiesel.

During the conference, I heard the challenge’s four finalists. All projects were equally fascinating and interesting. The winner of the challenge was the NGO Blue Ventures. Blue ventures is a conservation and research organization working with coastal communities in Madagascar, Belize, and Malaysia. Its approach to ocean conservation has allowed not only the maintanance of the ecosystem but it has also increased the food security, education and general lifestyle of the communities living in the coast. Blue Ventures is another good example that conservation and development, discussed in a previous post, are possible. This project has been able to find local solutions for the community but it faces a major threat: climate change. Ocean ecosystems are the most sensible to weather changes. If the ecosystems are inevitably damaged, the learnings of the community may become useless.

Another finalist was the organization Rainforest Foundation UK. Their project was incredibly simple and yet very powerful; I could not help but be amazed by it. The organization has managed to protect the land and the resources of rural communities living in the Congo Basin. How? By giving them maps and teaching them how to use it, in a process called “participatory mapping”. Simple as that. Teaching the community how to interpret maps and how to delimit their property has empowered them to protect it from extracting or logging companies that destroy or damage their ressources (because the empowerment of communities helps protect common property). I was marveled by the ingenuity of the idea, although I was not convinced that it could be that simple. To make participatory mapping work, there has to be a political/governmental framework willing to listen and help these rural communities. As the project director explained to me later, the governments in the area were willing to help the communities because through time -and also through lobbying, campaigning, negotiating-it had recognized the fact that extracting companies have tended to discredit and neglect local communities human rights. This was a lucky project, because I am not sure if all governments would be able to recognize this fact.

Another interesting project, from 2010, looked on how to solve droughts. As explained in a recent post, droughts are a major problem in some countries and it is a threat to political and social stability. In an attepmt to solve it, Allan Savory & African center for Holistic Management created a program called Operation Hope (and this time there is no military attachment to the word “hope”). The program seems pretty amazing. By increasing livestock in an area, water scarcity is reduced and droughts are less harsh. Because of “holistic planned grazing” the program has restored water catchments and river flows and it has increased forage and wildlife. It would be interesting to go deeper into the details, but I found it to be a wonderful project.

All those projects are equally remarkable an admirable. Most of all, they represent a new way to approach existing problems. By applying a  “systems thinking” approach and a more holistic strategy planning, they have managed to solve multiple problems at once. There where many other projects that are definitely worth examining. They covered topics such as : how to connect NGO’s? How to enhance micro-loans? How to improve health in an affordable and accesible way? If you view yourself as a problem solver, I strongly suggest to visit the webpage!

Julia Naime is a Research intern at the SISGI Group. She is a student at New York univeristy, and will graduate next year with a major in Economics. To learn more about the SISGI Group, visit www.sisgigroup.org