On January 12, 2010, a 7.0 magnitude earthquake struck Haiti and left its capital city of Port-au-Prince in complete ruins. More than 200,000 people died, and an even greater number were left homeless. A little over a year later on March 11, 2011, an 8.9 magnitude earthquake (and subsequent tsunami) hit Japan, but there was far less damage and less 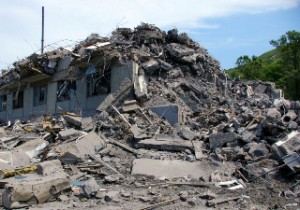 than 25,000 deaths. While both natural disasters are devastating tragedies, it’s interesting how the earthquake in Japan, which was one of the most powerful earthquakes in history and 100 times stronger than the one in Haiti, caused only a fraction of the damage.

There’s one huge difference between Japan and Haiti: Japan is one of the richest countries in the world, and Haiti is one of the poorest. This undoubtedly had implications for both nations’ preparedness for an earthquake and ability to recover from a natural disaster. Japan’s buildings are relatively earthquake-proof – they’re engineered to withstand intense and sustained shaking. When an earthquake hits, they sway instead of crumble. Japan can afford this type of infrastructure, and even skyscrapers remained standing after the extremely powerful earthquake struck. It really is a testament to how well-constructed Japan’s buildings are and how prepared the country is for potential earthquakes.

Haiti, on the other hand, cannot afford to build this quality of infrastructure. Buildings are constructed with poorly mixed concrete and they lack adequate engineering strategy to withstand the intensity of an earthquake. Consequently, as we know, Port-au-Prince was reduced to rubble last January. Even more concerning is Haiti’s ability – or inability – to recover from such devastation. How can the struggling nation rebuild without compromising the quality of its infrastructure?

Fortunately, there is hope, guidance, and inspiration from other areas of the world. In Bihar, India – the poorest state in the country – a massive flood affected more than three million people and left over 150,000 homeless in 2008. In order to rebuild the area in a more disaster-resistant and sustainable way, a community reconstruction initiative involving the Owner Driven Reconstruction Collaborative (ODRC), the Government of Bihar, the UNDP, and over 130 neighbors from local villages was implemented. Houses were rebuilt with supportive bamboo, solar-powered lights, and eco-friendly toilets. Not only were the new walls stronger and more disaster-resistant, but the homes were also constructed in an environmentally friendly way.

Three years after a flood destroyed the area, rebuilding Bihar sustainably has been a huge success. The government has since added three more flooded areas to the reconstruction plans, and there are over 100,000 homes that will be rebuilt with more strength and sustainability than ever before. Bihar provides a successful model to other areas of the world that have suffered from a natural disaster – like Haiti. Rebuilding a city sustainably is no easy task, but with community participation, government help, domestic and international aid, and strategic planning, it’s possible.

At the  end of the day, these natural disasters and severe weather events are so terrifying because we can’t control them. Even if they’re somewhat predictable (like a hurricane, for example), it’s impossible to know just how bad it will be until we’re left to evaluate the destruction. It’s important as destroyed cities like Port-au-Prince are rebuilt – and as any area is developed – to be as preventative as possible. High construction standards need to be implemented and met so stronger infrastructure is built, as opposed to buildings with weak foundation that cannot withstand earthquakes and other natural disasters. Obviously, there is no way to be completely prepared for these events and prevent any damage from happening, but it can certainly be minimized.