Every now and then I read an article that I simply have to share with someone; so, today I share it with you!  The article in this case is about Lapu-Lapu, a city in the Philippines which has taken an interesting route to promote ecotourism: recruiting 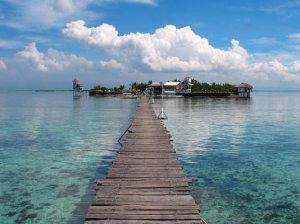 students to act as ‘ecotourism police’ who report people they see breaking ecotourism laws.  The “School Eco-tourism Police” force is made up of 3,000 top 20 students from local high schools as well as students from grades 4 through 6. They were sworn in and given badges by the Lapu-Lapu city Mayor Paz Radaza over the weekend.  The program was organized by the city government and the University of San Jose-Recoletos. The intention is for the students to encourage respect for environmental laws and protect the environment.  The student police force will work with the local police office to provide information about illegal activities that destroy natural resources. Since the city is largely dependent on natural resources as its source of income, the student police force will be helping the economy as well as the environment.

I find the “School Eco-tourism Police” idea interesting because it has two distinct sides.  On one hand it seems like an excellent way to promote ecotourism, since it provides a firsthand look at ecotourism and the environment and how such issues affect the local community, which is something the students will likely carry with them for the rest of their lives.  Further, by helping to stop the destruction of natural resources the students will be benefitting their local community and economy.  For example, many of the students helped plant over 10,000 mangroves in a local wildlife sanctuary. Mangroves are hardy trees that protect coastal areas and communities from storms, waves, and typhoons, and so the new grove will help protect the city from environment-related disaster.  The students also helped with coastal cleanup and encouraged their friends and family not to throw trash on the beaches, which are major tourist destinations.  By cleaning up and preserving the local beaches and natural resources that draw tourists, the students are helping boost the local economy.

On the other hand, however, the “School Eco-tourism Police” force also has a distinctly Orwellian twist to it, only with people being reported for ‘doubleplus naturedestroy’ instead of being reported for ‘doubleplus crimethink.’  After all, the students are encouraged to report their family members and neighbors who break the city’s ecotourism laws, which seems to be a perfect parallel to the children in 1984 who were encouraged to spy on their parents—though of course those who break ecotourism laws in Lapu-Lapu are certainly not “vanished” like those who are accused of thoughtcrime in 1984.  The idea of giving students badges and encouraging them to report their own friends and families to the police for violating ecotourism laws seems somewhat sinister, even if the program was designed from completely innocent motives.

So the “School Eco-tourism Police,” while it does have its pros, maybe needs to be thought out a bit more before other communities adopt similar strategies to promote ecotourism and reap the economic benefits that increased tourism provides.  Maybe by creating a sort of environmental boy scout or girl scout troop that does not report people for violating the ecotourism laws, but simply promotes education and awareness of how the laws help the community.  Or perhaps something as simple as educating students on ecotourism and environmental awareness, so that they still carry the information with them from a young age even though they are not actively searching out lawbreakers.  The “School Eco-tourism Police” seems to be one of those ideas that is good in theory (what could be better than getting a bunch of cute kids involved in ecotourism?) but poor in practice (Orwellian implications of having children with badges reporting family and neighbors). So while I agree that it’s important to get everyone in the community involved in ecotourism—especially when that ecotourism brings much needed tourist dollars—there must be a better way.