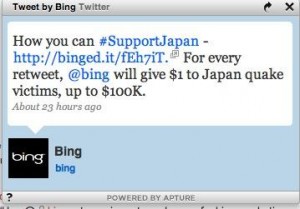 Was Microsoft Wrong to Use the Japanese Earthquake for Marketing?

It all started with what some people consider the age old scratch my back and I’ll scratch your back concept i.e. to donate $100,000 and at the same time use that effort to market Bing.

The tweet led to a whole lot of criticisms such as:

“Why doesn’t Bing just give $100K to support Japan? Why turn a tragedy into a promotional opportunity? That isn’t even a large sum for relief“…Kiel T F Schmidt as kieltfs.

“Nothing like human suffering to promote your product. If Microsoft had done the same during 9/11 would you even be asking this question? I suspect not. I imagine the outcry from the American public would have been deafening.“…Dave

Although Microsoft apologized by saying “…the tweet was negatively perceived. Intent was to provide an easy way for people to help Japan. We have donated $100k.“, I wondered whether people were really being too harsh?

When a loss occurs, the last thing anyone wants to see is someone trying to benefit from such a loss or to use that loss as a tool for marketing.  The tragedy about corporate giving today, is that it has picked up on the trend that once corporations make some form of “donation“, they should be excused from certain ethical expectations especially towards the recipient.  The question I feel compelled to ask in looking at Microsoft’s act is why not simply donate the $100k towards Japan’s relief efforts? Wouldn’t that have placed the company in good light with the public, if its true aim was to contribute towards the Japan relief efforts? Alternatively, if the company’s main reason was to market Bing, why not give the 100k when people click on Bing without associating it with such a tragedy?

Some people may feel that I am equally being too hard on Microsoft and others claim that “at least the company is helping and the money is getting there ~ whatever helps the cause,” but consider this:  if a member of your family died during the earthquake or a tragedy of such magnitude happened in your city, would you still think that tweet should be brushed-off as mere corporate giving? Don’t get me wrong, I like Microsoft.  I actually believe that the company, from a business prospective, is great and a wonderful asset to development.  A few days prior to this tweet incident, I was most impressed by the fact that the company had made its cloud-computing service available to governments and nonprofits who are in Japan responding to the disaster, and also by the fact that the company had made an initial commitment to donate $2 Million for the same relief effort.

Notwithstanding the cloud-computing service and their prior donation, I had to talk about their tweet because I find that there is an increasing trend whereby companies make “donations” that are really just baseline marketing initiatives. When I reflect on statements like that of Dave above, I am reminded that corporate giving does not have to go down that road.  There are other marketing tools that can be adopted without benefiting from a tragedy and of course it wouldn’t hurt to think before you tweet!